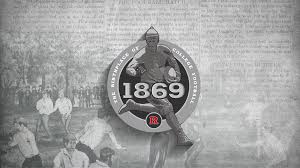 Every Saturday in the fall, fans across the country get ready to watch their school’s football team take the Gridiron. On November 6, 1869, the first college football fans gathered to cheer on their teams in a game that would change the corse of American sports forever.

150 years ago  The Universities of Rutgers and Princeton met on what is now the College Avenue Gym and parking lot on Rutgers New Brunswick campus.  They played a game that probably resembled soccer more  than football. Rutgers Football won the contest 6-4 and went down  in the record books as the first team to win a college football game.

For a century and a half college football has captivated the nation giving birth to a sport that has taken over two days of the week.

For some fans this day represents more than just the birth of a sport . Rutgers Alumni and Senior Vice President at Oppenheimaer Funds Andy Mika said “It’s a very special day for Rutgers football, the birth place of college football. Its amazing to see what started 150 years ago and the amzing impact it has had throughout this nation, as far as education, a positive image for the universities and bringing alumni back together”.

The impact of football can be seen in the classroom.

According to USAToday, In 2018 the Institute for Diversity and Ethics and Sport reported that the overall football Graduation Success Rate (GSR) is up to 79 percent, climbing from 77 percent in 2017.

Football like many sports has a unique way of teaching lessons you can’t learn in school . When asked  about what football has done for him Tom Brady  quarterback of the New England Patriots said “To me, football is so much about mental toughness, it’s digging deep, it’s doing whatever you need to do to help a team win and that comes in a lot of shapes and forms.”

For others like Rutgers graduate student Mitch Crenshaw, college football means more than just the wins and losses on the field. It’s more about the sense of comradery you have (as a fan ) that you don’t have with other people. Being a student at that school, you still have to be proud and represent as much as you can.”

For the last 150 years college football has brought together people of every race, color and creed to cheer their team on to victory. It is not just a game, for some it is an escape. A place where players can fight for a goal that is bigger then themselves and make life long friendships along the way. It has taught numerous life lessons both in victory and defeat and has effected the lives of millions of Americans and it all started on the banks of the Raritan.