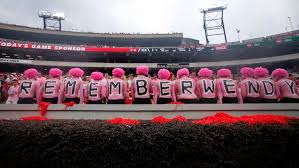 `Sports has a unique ability to bring people together, unlike anything else in the world. No matter your race, creed, or political leaning, we can all come together to support our favorite team. Earlier in the month, two college football teams put their differences aside and united in the fight against Breast Cancer.

Fans of the No. 3 ranked Georgia Bulldogs dressed in pink to honor the late wife of opposing Arkansas State head coach Blake Anderson.
Anderson’s wife, Wendy had been battling Breast Cancer for two years before she passed last month. When Bulldog fans heard about her passing, they decided to move up their annual “Pink Out” game to honor her.
A group of fans paid tribute to Wendy by going shirtless with the letters remember Wendy spelled out across their backs.
After the game, Anderson told CBS Sports that (the gesture) “Just caught me off guard, to be honest with you. Teared me up. I wasn’t expecting it, and am extremely flattered and thankful for those folks and so many others that have stepped up in so many different ways.”

Even though Arkansas State lost the game the actions by the opposing team will be remembered by Anderson’s family forever.