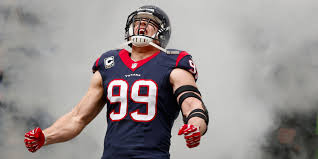 Houston Texans Defensive End, JJ Watt, is a force of nature on the football field. Standing at 6 foot 5 and weighing in at 289 pounds, many teams have tried to stop him, but few have succeeded.

This season, the five time Pro Bowler and two time Defensive Player of the Year, missed over half the season due to a torn pectoral muscle suffered in week 8. For most players would be a season ending injury, but JJ Watt isn’t most players.

Putting the Wild in Wildcard

The Houston Texans and the Buffalo Bills brought in the 2019 playoffs with a bang. The Bills had not won a playoff game since the year before their starting quarterback Josh Allen was born. The Texans were looking to bounce back from an embarrassing loss in last year’s wild card game.  The stage was set for a great game and the teams didn’t disappoint.
The Bills were in complete control of the game, scoring the first 16 points unanswered.  With just under seven minutes ago in the third quarter the Bills were in the red zone and were looking to put the game away. Watt had other ideas.
He sacked Allen and forced Buffalo to settle for a field goal. Take a look.

It was then that the Texans began to comeback . They went on to score the next 19 points forcing the Bills to kick a field goal late in the game to send it into overtime .
In overtime the Texans offense proved to be too much for the Bills to handle after an incredible play by QB Deshaun Watson evaded two defenders and threw a dart down field to set up the game winning field goal.

The theme of the day for the Texans was “let’s be great.” Before the game Watt told his team:

That’s exactly what he and the Texans did. Despite being down 16 – nothing, despite having an 0-22 record when losing buy that margin and your best defensive weapon having a torn muscle in his chest, the team didn’t give up. The Texans comeback and won.

Special things can happen when you believe you can win no matter the circumstances and the Texans showcased that on Saturday.