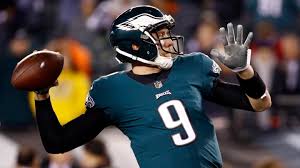 As a backup quarterback in the NFL, you always have to be ready to have your number called, but what happens when your name stops getting called? This was a question Philadelphia backup Quarterback Nick Foles thought about a lot as a backup for the Kanas City Chiefs in 2016.

Foles explained in an interview with Ellen Degeneres last February that he had lost his love for the game of football, wanting to leave the NFL to pursue a career as a high school Pastor, but it was ultimately his faith that caused him to stay in the game.

During this tough time, Foles took solace in this verse

My grace is sufficient for you, for my power is made perfect in weakness. Therefore, I will boast all the more gladly about my weaknesses, so that Christ’s power may rest on me.

Foles said in a video on the Bible app Youversion a Christian devotional app.

In 2017 Foles got his shot to get back on the gridiron with the Philadelphia Eagles when starting Quarterback Carson Wentz went down with a season-ending injury. Foles now had the daunting job of leading his team through the rest of the season and into the playoffs without having the luxury of taking regular snaps (field time). For Foles, this was nothing new. In 2013, he stepped in for an injured Michael Vick. In ten games, he threw 27 touchdowns with only two interceptions, leading the team to an 8-2 record. According to  USAToday.

Last year, he brought the Eagles to a 41-33 upset victory in the Super Bowl over the New England Patriots. In the game, he threw for 373 yards and caught one touchdown using the Philly special.

Foles became only the second Backup Quarterback in the history of the NFL to lead his team to more than one playoff appearance in multiple seasons. Earl Morrall did it as a member of the Baltimore Colts and The Miami Dolphins.

According to 247sports, in his five career playoff games, Foles has thrown ten touchdowns, three interceptions and has had a 105.2 passer rating. He holds the record for highest passer rating and completion percentage in NFL history.

With these great numbers, why was Foles still a Backup Quarterback?

In the offseason, Foles declined trade offers from the Browns. To an outsider, it seems that he wanted to stay in Philly. Regardless of whether or not he was starting.

He told Fox sports “I want [Carson Wentz] to have a great career, even at the expense of me not playing. That’s where I gotta put my ego aside.”

This season, Foles waited in the wings until Carson Wentz when down again. This time with a fractured back.

In his first start in three months Foles upset the Rams, leading the team to a 30- 23 victory.

Putting The Wild in Wildcard

Last Sunday Foles did what he does best, leading the Eagles to another playoff victory against a number one ranked Bears defense. He threw for over 250 yards with two touchdowns with a pair of interception

After a missed two-point conversion the game came down to a Bears 43-yard field goal that bounced of the uprights giving the Eagles a 16-15 victory,

With this win, Foles became the first QB since 1970 to lead his team to back to back playoff wins against a number one ranked defense.

For the second year in a row, the Eagles are trying to make a deep run in the playoffs. Even though I am not an Eagles fan, I can’t say it hasn’t been entertaining. The Eagles will take on the Saints on Sunday at 4:40. The game should be great so don’t miss it.

As a backup, Foles never knew when his number would be called, but it’s clear that his number has been called for a higher purpose.