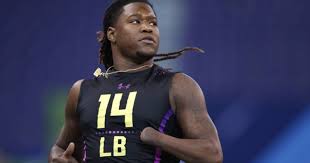 In the dead of night, four-year-old Shaquem Griffin made his way to the kitchen and grabbed a kitchen knife and started to saw at his hand because the pain was too much for him to take. Griffin suffers from amniotic band syndrome, a condition that causes extreme pain due to lack of blood flow to the hand, causing his hand to be underdeveloped. This ultimately would lead to having his hand amputated just below the wrist.

Having only one hand never deterred him from pursuing anything. Growing up, Griffin’s dad would tell him “if I can do it with two hands, you can do it with one.” This mindset made Griffin fiercely independent. As a result, he learned how to tie his shoes and climb trees faster than his twin brother Shaquill.

In high school, Griffin proved that he could dominate in almost any sport, making a name for himself in Baseball, Football, and Track. When it was time for college, the two Griffin boys decided to attend UCF so they could play side by side. It was here that Shaquem would face his greatest test yet.

Like many freshmen, Shaquem had aspirations of getting to college and having an immediate impact on the team. As training camp came to an end, it looked like he was going to. In a Players Tribune article, Griffin explained that he had worked his way up to the second team, but the day before the first game of the season he got bumped down in the depth chart, with no explanation as to why.

That year instead of playing alongside his brother, Griffin had to watch from the sidelines as a redshirt freshman. In his first three years of college, Griffin only saw playing time about three times, making him want to quit.

The summer going into his junior year, his teammates were asked to stay at school for the summer, but Griffin was sent home. Griffin explained he was at his lowest point and he was ready to quit the team, then something happened that would change his view on life forever.

Since he was not with his team for the summer, Griffin spent his days working with his dad at a towing company. After getting done with a job, the customer took a five-dollar bill, ripped it in half and gave half to him. As Griffin took the half dollar, the man said,

“Keep on working, son, because nothing comes easy.”

That’s precisely what he did. Despite an 0-12 season, Griffin played like a man possessed, recording 92 tackles, 20 of which were for a loss, and 11.5 sacks. He was named the American Conference Defensive Player of the Year in 2016.

In his senior season, he still had more to prove. During camp, Griffin slept at the team facilities so he could watch film and lift at night. All the hard work paid off in his senior year.

New head coach, Scott Frost, turned the team into a National Championship team going 13-0 on the season. Griffin was named first-team All-AAC for the second year in a row. He was also named Defensive MVP in the Chick- fil -A Peach Bowl recording 12 tackles and 1.5 sacks to complete an undefeated season.

At the Combine, Griffin went from relatively unknown to a household name, becoming the fastest linebacker to run the 40-yard dash since 2003. He wowed everyone when he bench pressed 20 reps at 225 pounds with a prosthetic hand.

From passion to  purpose

F has a new meaning for him. He wants to use his platform to inspire others to accomplish their dreams.

“I mean, my purpose for me is to be able to set a standard and get away from people saying — setting limitations on others,” Griffin said. “I never wanna stop helping people and inspirin’ people to do– to be the best that they can be. So even without football– football doesn’t define Shaquem Griffin. It’s who we can help that defines us.”

Shaquem Griffin will have the chance to inspire many on Sundays. As the 141 , he will join his brother as a Seattle Seahawk becoming the first one-handed player to ever be selected in the draft.