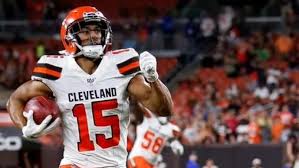 You have $200 in your bank account, you haven’t played football at a competitive level in two years, and there is an NFL workout in Florida that you are not invited to.  What do you do?

If you are Damon Sheehy-Guiseppi, you go for it.

He took that 200 bucks and bought a plane ticket to Miami. All he need was a place to stay and a way to get into the workout . Once in Miami, he spent two nights outside of the facility and one night in a 24-hour gym before the workout opened.
According to an article by Deadspin, he got creative when it came to getting past the doorman telling him, he was a friend of the Browns Vice President of player personnel Alonzo Highsmith. Once he got on the field, it didn’t matter who he was, the only thing that mattered was if he could play. A former All- American return man out of Phoenix College, he took advantage of his opportunity and ran a 4.38 40-yard-dash. This was good enough to land him a spot on the preseason roster.

On August 8th, in his first preseason game, Sheehy-Guiseppi made sure the coaches would remember who he was. With less than four minutes to go in the game, he ran back an 86 yard punt. What makes the run even more memorable is the fact that he wasn’t wearing his own cleats. He borrowed some from his All-Starr teammate Odell Beckham Jr because he lost his.

In four months Sheehy-Guiseppi went from lying to get into a workout to scoring a TD wearing Odell Beckham’s shoes. While it is still a long shot for him to make the team, it just goes to show you that crazy things can happen when you chase your dreams.

That’s it for this post. Be sure to like our Facebook page and to follow us on Instagram using the icons below.  If you liked this post you should read how Alfonzo McKinnie went from $175 in the bank to $1.5 Million contract. It’s amazing what you can do if you don’t quit!