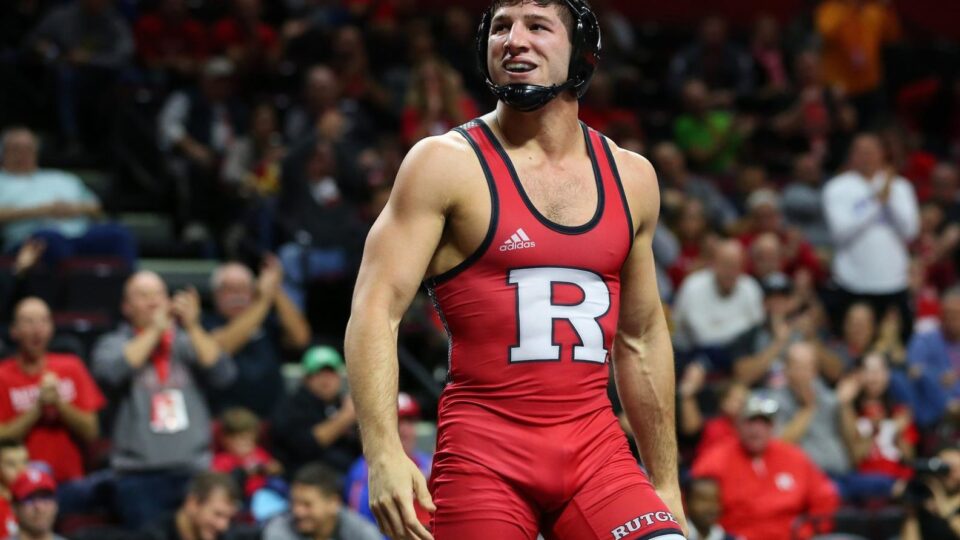 As the door opened to the closet-sized bell chamber of the original Old Queens building on Rutgers University’s College Avenue campus, Anthony Ashnault could see the worn and faded signatures of athletic greats who had come before him lining the walls. With three pulls of the thick rope, he rang the 175-year-old bell to the delight of cheering bystanders outside.

On March 21st, Anthony Ashnault and teammate Nick Suriano became the first national champions in Rutgers wrestling history. By ringing the Old Queens bell and signing the wall, Ashnault put his name into Rutgers lore with athletes such as the 2007 women’s basketball team, who made it to the final four, and the undefeated 1961 football team.

For Ashnault, this day was the culmination of six years, 123 wins and four all American seasons, two redshirt seasons and an undefeated senior season. The journey to becoming a national champion started just down the road from Rutgers in South Plainfield, NJ.

Ashnault explained that his home town helped set the tone for his wrestling style early on. “My town is an old blue collar town, and wrestling is a blue collar sport in the fact that you get black eyes, you get beat up, just like a blue collar worker going to work. It’s hard work for not a lot of pay or reward and that’s a mindset that I use. I wanted to put in the work even though the reward wasn’t always there. Just trusting that it’s going to happen.”

From a young age wrestling Ashnault showed that he was going to be an outstanding wrestler, winning a New Jersey State Championship every year from the time he was in first grade to his senior year in high school. It was after his first high school state championship as a freshman at South Plainfield, that he figured out a formula to duplicate his success on the mat.

“If I put in the time, the energy, set a plan, follow through and don’t cut corners, I can do something special” he said. The formula worked. Ashnault went undefeated in high school, winning four consecutive state championships.

Coming into college at Rutgers, Ashnault had a twofold vision. The first was bringing Rutgers from a top twenty program to a top ten program. The second was to begin to recruit New Jersey’s best wrestlers to Rutgers while becoming a national champion in the process.

In his redshirt senior season, Ashnault wasn’t sure if becoming a national champion was going to be in the cards after missing the whole 2018 season due to shoulder and knee surgeries.  It was here that Ashnault said he faced the biggest challenge of his career, not the physical, but the mental.

Ashnault stated “The biggest challenges have been mental stress and doubt and everyone has that and overcomes that in different ways. For me, it was getting to know who I was, who I wanted to be and what I wanted to represent. Once I did that it was a lot easier. The first three to four years I was in the process of figuring out who I was while trying to wrestle at a high level. It created a lot of distractions for me.”

While being sidelined his senior season, Ashnault had to petition the NCAA for a sixth year of eligibility. It was at that time that he was at the lowest point of his Rutgers career. “I had a lot of negative thoughts of not being an All American and not being a National Champion,” he said. It was during that time of doubt that he asked himself one very important question.

“That’s the mentality that started to change. Instead of being down I was going to do everything I could.”

While an undergrad at Rutgers, Anthony Ashnault got the nickname Shnaulty B Mobbin, after the song Shabba by A$AP Ferg. What started out as a joke amongst friends soon spread to the coaches and the coaching staff and then the whole school. Ashnault used it as an “alter persona” on the mat, saying “I’m a nice guy but on the mat, you might not think so. I put the mask on and it helps me deal with the nerves and anxiety.”

In 2018, Ashnault was granted a sixth year and came back with a vengeance. Going 32-0 and beating Princeton’s Matthew Kolodzik in a dominating 10 – 2 victory to improve to the number one seed in his weight class.

This only added fuel to an already raging fire. After that match, Anthony Ashnault had one thing on his mind; finishing the job.

In the finals at the NCAA tournament in Pittsburg, that’s precisely what he did, beating Ohio State’s Micah Jordan for the third straight time that season in a 9-2 victory. Click below to view the full match.

Being a national champion has always been a goal for Ashnault, but more importantly, he wants people to be inspired by his journey.  He wants to show people that if they believe in something they can accomplish it.

“The journey is where you are going to grow and find out who you are” he said. “There have been a lot of times where I fell off on the way, but that is where I learned the most. Having a big setback or failure, that’s how you learn how to get back on the horse, back on the path that you want to get to.”

For Ashnault winning the national title isn’t just the culmination of years of perfecting his craft through countless hours in the gym, it is a platform for him to reach others through the sport he loves.

Ashnault said “I want people to know my story because you never know who you are going to touch.”