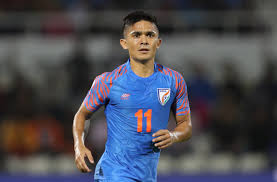 When we think of Soccer superstars we think of players like Portugal born Cristiano Ronaldo or Argentinean Lionel Messi. Most people wouldn’t think of India when it comes to Soccer’s elite players. Sunil Chhetri is trying to change that. Earlier this week he past Messi for the second most international goals in history with 70.

In this article, Shamani Joshi, of Vice, breaks down how the historic goal was scored in the first match of the I Cup.

Sunil Chhetri was also named player of the year in the All Indian Football Federation for the 2019 season. This is the sixth time he has been named POY,  more than any other player in the league.

Soccer’s popularity pales in comparison to Cricket in India. Last year Chhetri took it upon himself to try to change that. He made a video asking fans to come to see his team play.   The next game was sold out.

If Chhetri keeps playing the way he’s playing and soccer continues to grow in India, there is no telling what could be possible for Indian Soccer.