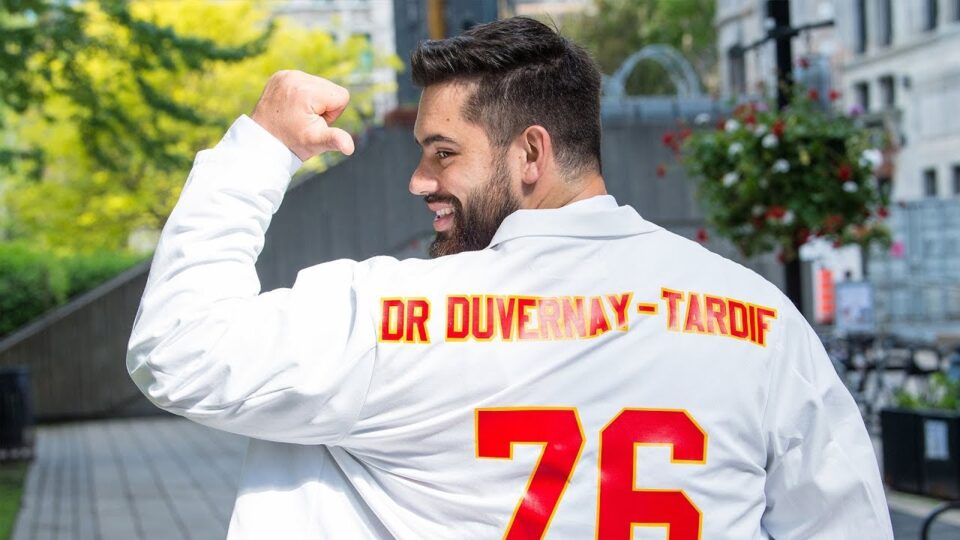 On February 2, 2020, Kansas City offensive guard Laurent Duvernay-Tardif reached the pinnacle of his profession when the Chiefs beat the 49ers 31-20 to become Super Bowl champs. At that moment, he would have never guessed that in four short months, he would be trading in his pads for a set of scrubs and joining the fight against COVID-19 in his home country of Canada.

From a young age, Laurent Duvernay-Tardif wanted to become a doctor. He told Forbes that when he was 15, he got interested in engineering, and engineering was a stepping stone that brought him to medicine. As good as he was in school, he was equally as good on the football field. He played college football at McGill University and was named the J. P. Metras Trophy winner two years in a row. This award goes to the best linemen in Canadian college football.

Playing football at the university level is hard enough. Now imagine doing it while pursuing a medical degree. To accomplish this goal, Tardif did something unconventional; he took his classes over eight years. This way, he could complete his course work even if he was in the NFL.

Laurent Duvernay-Tardif and the Chiefs

Duvernay-Tardif was drafted with the 200th overall pick to the  Kansas City Chiefs. As an NFL player, he would use the offseason to work on his course work. In 2018, he graduated and became the first player in NFL history to have a medical degree and play in the NFL at the same time.

When COVID- 19 hit the world stage, Duvernay-Tardif was on vacation and he returned to Canada just before the country shut down. After his 14 day quarantine, he decided to step in and put his medical degree to work. Right now, he is working with geriatric patients in a nursing home in his hometown of Montreal.  Check out this interview with CBS, where he explains his day today and the future of the NFL season.

As of right now, the NFL season is expected to start on time, but until then, Duvernay-Tardif will continue lending his expertise in the medical field. To all the front line workers who are working  during this pandemic, we at Greater Than the Game would like to say thank you. It is because of you all that one day soon we will be able to go about our daily lives.